In the past, social media have both been seen as an unprecedented opportunity and a lethal threat for Democracy.

This week in our Long Reads section, we are featuring the best piece of journalism we have read so far on that very topic: the impact of social media on Democracy.

Extracted from the print version of The Economist from November 4, this article titled Once considered a boon to democracy, social media have started to look like its nemesis actually makes a point before it even begins, with a sarcastic cover image and a punchy baseline: In this (very) long read, you will learn about:

What’s in it for Social Media Managers: an interesting take on what is happening on the field from a macro perspective and a reminder of our major role in the game a professionals who use social media every single day.

And it’s even simpler to use:

Although the primary purpose of Demoji may be to send augmented emojis to your friends in private conversations and group chats, this can also prove very useful on social media, in at least two different ways:

Demoji is available for free on iOS & Android.

Let’s kick off this week just like we ended the previous one, with social media usage data: today, we are focusing on the percentage of Snapchat audience exclusivity.

That’s the proportion of Snapchatters who are exclusive to the Snapchat platform on a given day, in comparison to those who use Snapchat and also use another platform.

Here are these results, segmented by country (USA, Canada, UK, France, Germany, Saudi Arabia & Australia), in the form of a very nice GIF:

You can learn more about this study, both on Snapchat’s blog and App Annie’s blog Insights sections.

Timing is interesting, as these numbers, which can potentially trigger a fair dose of FOMO amongst advertisers, get announced at the same time as Snapchat is rolling out its new sponsored stories & “hands-on” AR ads.

What these numbers do not show however, is the size (absolute numbers) and percentage (relative numbers) of the broad Facebook ecosystem’s audience exclusivity, i.e. how many users are exclusive to the Facebook / Messenger / Instagram on a given day, in comparison to those who use one of these platform and and also use Snapchat: hint, it must be significantly higher than the numbers above.

What’s in it for Social Media Managers: a very clear incentive to give Snapchat’s new ads a go, while keeping in mind that Snapchat remains a smaller platform than competition.

According to Verto Analytics‘s October 2017 social media usage index, Facebook is still very clearly dominating the industry, with three of its platforms — namely Facebook, Instagram & Facebook Messenger — in the the Top 4 of the most used social networks: 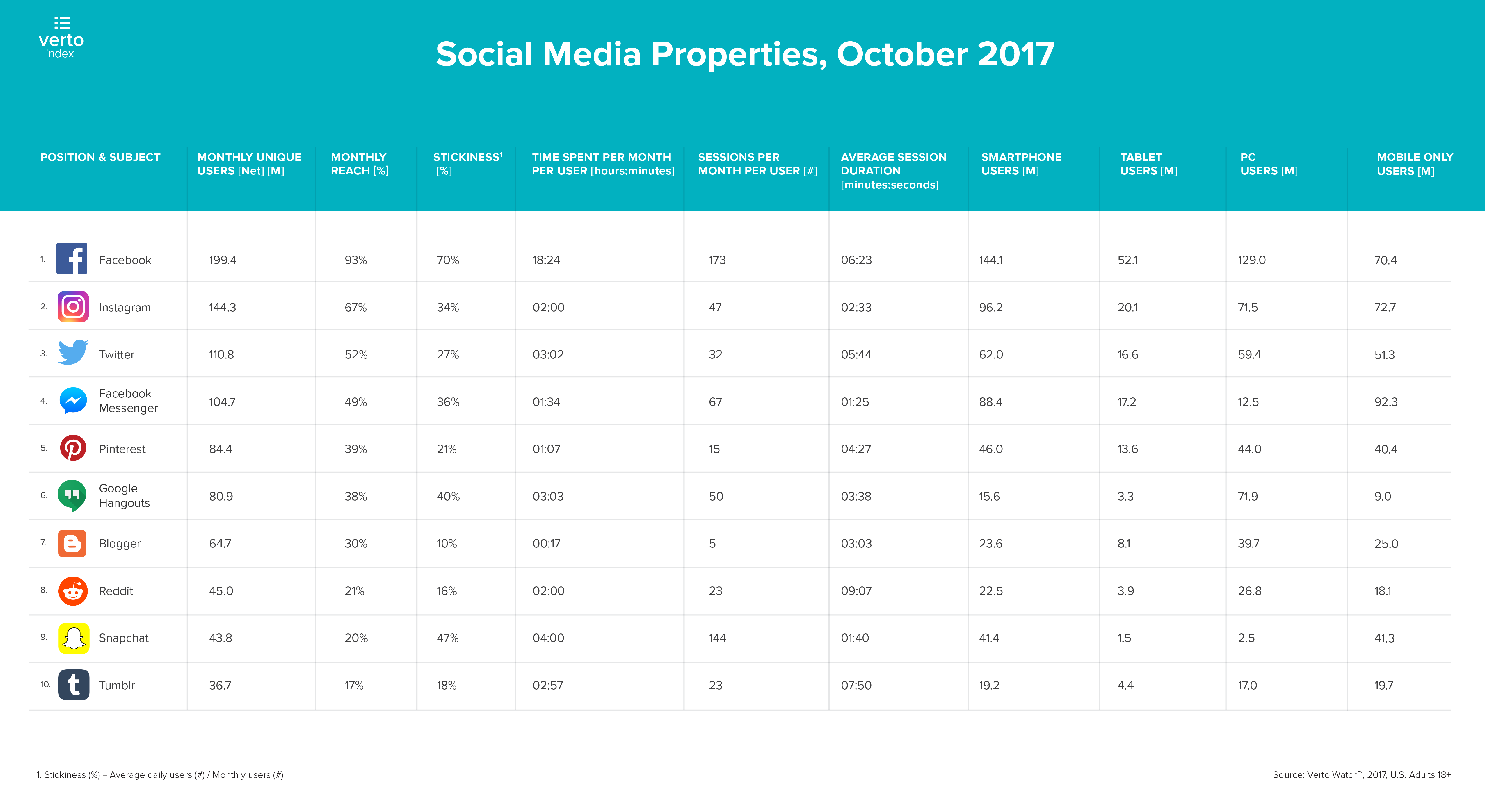 In particular, it’s interesting to note that:

What’s in it for Social Media Managers: a clear signal that investing time, energy and money on Facebook as an ecosystem (including Facebook, Instagram & Messenger) is a safe bet given how neatly the blue giant dominates the market.

Of course, you can boost productivity with streamlined processes and performant collaborative tools… you can also get more focused and achieve more by setting the right atmosphere at work, for instance with great office music.

That’s the promise of Studiowave: a free vibe machine for offices, studios and all of us who need focus at work. The interface is super simple and allows you to mix nice instrumental beats with inspirational speeches, by setting a volume level for each element, and come up with the perfect office music for you.

What’s in it for Social Media Manager: a nice way to get in a killer mood and enter the “flow” to prepare your social media calendars (with Loomly).

If you want to learn how Facebook News Feed works, then the best way is probably to watch this video by Facebook themselves:

This video is to be watched in parallel with these News Feed publishers guidelines:

What’s in it for Social Media Manager: a confirmation of what we already all know, i.e. that (good) content is king.

If your brand sells anything online, and you want to boost your sales efficiently and sustainably, then look no further than the eCommerce growth tactics introduced in Let The Ca$h Flow. The folks from Viral Loops & Contact Pigeon teamed up to create this very nice 39-page free eBook, focusing on the 3 corner stones of eCommerce growth (or any business for that matter):

Recommendations in this eBook are backed by data and illustrated with examples, respectively for more reliability & accuracy.

What’s in it for Social Media Managers: an efficient way to integrate social media efforts into a broader business strategy, for maximum impact on growth.

On Tuesday, Twitter officially rolled out the 280-character limit to all users: as of today, you can publish tweets with 280 characters via Loomly as well.

One little thing we have improved along the way is post preview for tweets including a YouTube video, which now show up in Loomly (and, of course, get published to Twitter) with a video Twitter card:

That’s it for today — a quick update letting you publish 280-character tweets and the ability to include YouTube Twitter Cards in your posts — until we bring something much bigger to you in the upcoming weeks: stay tuned!

As always, thank you so much for your support: you are the best users we could dream of.

Loomly is a visual social media planning tool that lets you preview your tweets before you hit publish: start your 15-day free trial now.

Loomly now allows you to upload larger media assets to your posts from Post Builder:

This update is already available to all Loomly users: login and create a new post now.

Along with faster upload and GIF to MP4 conversion, the increased limits above are in fact the tip of the iceberg…

We have been working on a brand-new architecture, which is the foundation for two two very nice new media-related features, coming by the end of the year.

We can’t wait to share these exciting updates with you: stay tuned!

As always, thank you so much for your incredible feedback and your continuous help: it’s an honor for our team to get up every morning and build Loomly for such an amazing community of users.

You are truly the best.

Loomly is a social media content management system that lets you plan, create and publish content to your accounts: start your 15-day free trial now.

According to research by 4C, 36% of social media professionals report that switching between platforms to manage execution of social media campaigns is the biggest annoyance of their job (source: Econsultancy). To be even more specific:

In addition, we are working on upcoming features that will let you handle more channels, more content formats and even some form of media, right from your Loomly calendars: stay tuned!